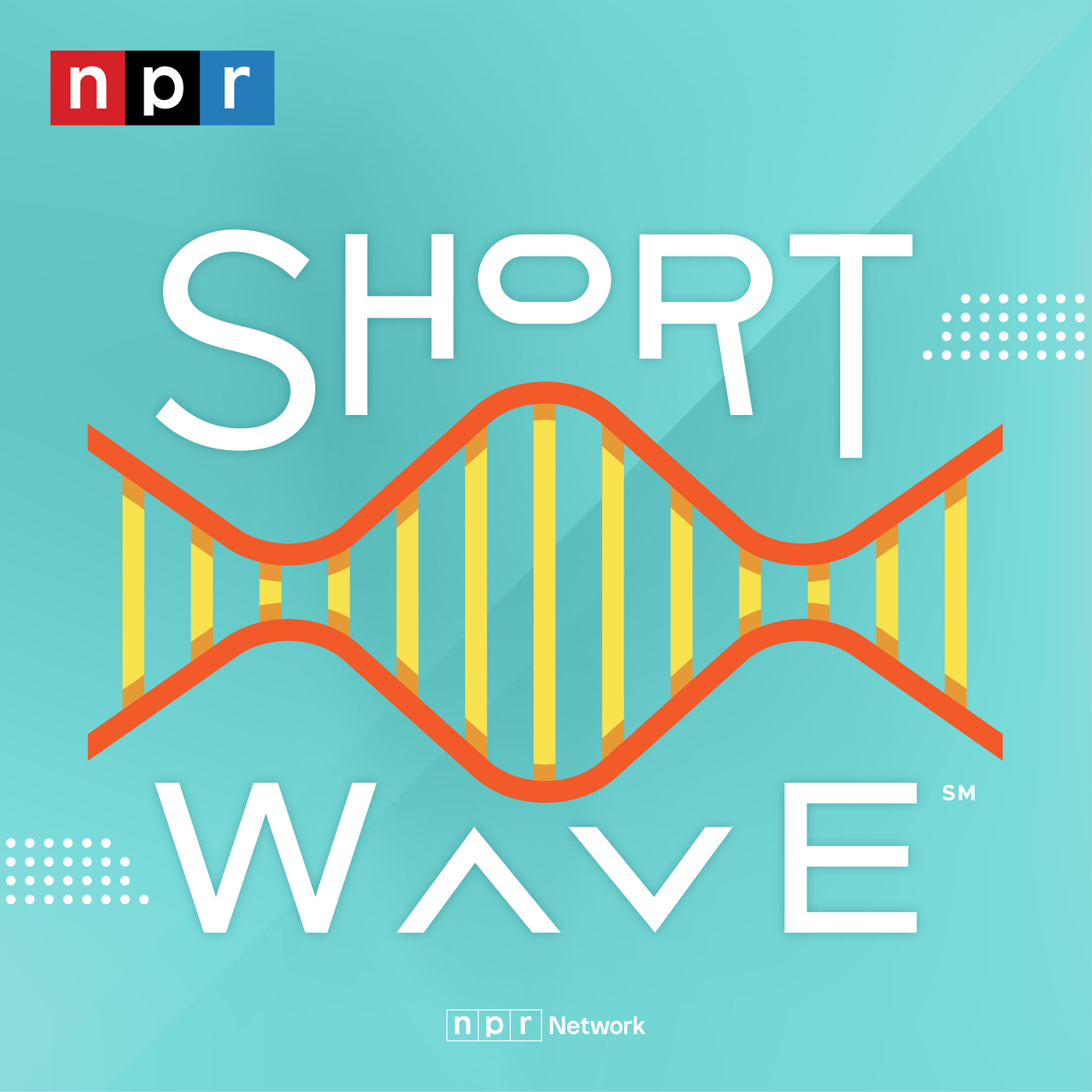 New discoveries, everyday mysteries, and the science behind the headlines — all in about 10 minutes, every weekday. It's science for everyone, using a lot of creativity and a little humor. Join hosts Emily Kwong and Aaron Scott for science on a different wavelength.

If you're hooked, try Short Wave Plus. Your subscription supports the show and unlocks a sponsor-free feed. Learn more at *plus.npr.org/*shortwave

Donate Your Body To Science?

Halloween calls to mind graveyards and the walking dead, so, naturally, Short Wave wanted to know what happens when you donate your body to real scientists. Host Aaron Scott talked with journalist Abby Ohlheiser about their reporting trips to a Forensic Osteology Research Station and an anatomy lab to learn how donated bodies help everyone from surgeons to law enforcement to forensic archeologists do their jobs. And while this episode might not be for the squeamish, Abby says these spaces of death are not morbid. Instead, they are surprisingly peaceful. You can read Abby's full article in the MIT Technology Review.

You're listening to Shortwave from NPR.

It's all Hallows Eve, my dear Ghoulies, and that's got us thinking about graveyards and the undead and the places where ghosts linger.

You know, I have been thinking about what I want to do when I die.

Turns out, journalist Abby Oehlheiser has been thinking about it too.

I thought vaguely that donating my body to science might be something that I would want to do.

But I realized that vaguely was doing a lot of work there, right?

Like, I didn't know the first thing about what to do, what that actually meant, and kind of what people were going to learn from it.

So they decided to explore this scientific realm of the dead for an article in the MIT Technology Review.

Today on the show, what it really means to donate your body to science, and how it helps everyone from surgeons to detectives to archaeologists do their jobs.

And while we should give a warning that this episode might not be for the squeamish, you might be surprised.

Abby says these places are not morbid.

They're actually quite peaceful.

I'm Aaron Scott, and you're listening to Shortwave, the Daily Science Podcast from NPR.

We started our conversation by asking Abby Oehlheiser to tell us about their visit to Western Carolina University's Forensic Osteology Research Station, known simply as The Forest.

They headed there with the director Nicholas Pasalacqua and the forensic anthropologist Rebecca George.

It's in a wooded area just outside of the campus, past the gate with a keep-out sign.

The first enclosure you see is for buried donors.

So these are people who have been covered in earth.

We pulled up, parked next to a shed where they keep all their equipment, and up on the hill is a chain link fence, and then inside the chain link fence is a wooded fence.

And through that is the second enclosure where they study donors who are above the surface decomposing.

What was it like to walk into this space?

It's hard to describe.

The first two things I noticed were the proximity of the first donor to the entryway.

The second was the smell, which wasn't particularly strong, but was somewhat memorable.

I think also when you haven't smelled decomposing humans before, you know that it's going to be a smell that is going to stick with you, and then also it's a very sticky smell.

And then I looked around and I noticed the students working quietly up the hill.

I noticed how quiet it was in there.

The name forest is correct.

It's a forested area that just happens to have a couple dozen donors in various states of decomposition in there being studied by forensic anthropologists.

What is the goal of this space?

Tell us a bit about their research purpose.

So primarily what they're doing is teaching their students how to learn everything they can from a body in the various states of decomposition, including from a body's bones.

You know, this has some obvious applications to law enforcement.

There's a lot that they can learn as experts from a decomposing body, but there are so many things that are incredibly difficult to tell and are almost impossible to do precisely.

So for instance, I think maybe a lot of us are used to seeing time of death or time sense death on say a procedural on TV, be this kind of pretty precise thing.

It's not, you know, for instance, the donor acts who I wrote about arrived in the middle of summer in July.

When I saw them, they were pretty advanced in decomposition.

That range of maybe it was two weeks, maybe it was five months, is like often pretty much what they can tell.

You write really beautifully about the decomposition process in the article.

Would you maybe describe what it entails for a body that is out in nature?

Sure. I asked Nicholas to teach me how to look at a body like a forensic anthropologist would.

And he immediately just started talking about life, right?

It didn't necessarily surprise me, but it made me feel really good about that space, right?

This is a space in which there are donors who have passed and have donated their bodies to be studied as they become bones.

And yet that space is so, so, so full of life.

So what Nicholas told me about was essentially the process of a body becoming a microbiome.

We walked up the hill.

He pointed to a body that had a lot of maggots on it, kind of sprinkle sized.

And he talked about how essentially baby flies, maggots, need to feed on the parts of the body that liquefy the first.

So they're laid on the eyes in other orifices.

The parts of the body that are the most vulnerable as they decompose.

At the same time, the gut bacteria is working from the inside out.

I mean, cadavers have long played a role in the history of science and medicine.

Can you maybe give us kind of the cliff notes version of how bodies have been used over the centuries and then how they're used today?

It's a long and complicated history and it's not a very nice one.

I think it's the shortest way to sum it up.

Body, quote, donation was essentially non-consensual for a long time, where corpses were stolen from graveyards, people who were in menstrual institutions, people in prisons were often sources for corpses for research, cadavers for research.

I think a lot of this stuff started in mid-20th century, where processes were set up for these donations to become consensual and to some degree regulated.

I think part of it is because of that history.

Also, one of the other things that I kept encountering was how the failures of the US medical system in the case for the story I was writing are reflected in the systems that deal with the dead that are used for research.

For instance, many facilities have a weight limit.

Sometimes it's for a good reason or a reason that is understandable.

For instance, at Western Carolina, which does have one, it's university regulations mean that they can't lift a body more than 250 pounds with the equipment they have available to them, which are gurneys and their own two hands.

That has obvious implications for training future doctors.

If future doctors are only being trained on bodies that weigh a certain amount or less, they are not going to learn how to treat all of the different bodies that they might come across in their practices.

Right. On the topic of training doctors, I mean, you visited the forest where they're studying decomposition, but you also visited the University of Maryland School of Medicine's anatomy lab.

What are the scientists and the medical students learning there?

Yeah. At the University of Maryland, the primary thing that they wanted to emphasize to me that their students were learning is how to treat living people.

Right. Students who are handling donors are essentially required by the school to observe hippo rules.

Right. They're not allowed to talk about their donors in a way that is any different from how they would talk about a living patient. Obviously, they're also learning how to do procedures, right, and learning about anatomy.

So some donors might be used for a basic anatomy class where students are essentially doing a dissection.

Pretty much everybody who's gone to medical school, nursing school, has benefited from a donor.

Okay, Abby, so you started this reporting process with the question of what happens when I donate my body to science.

What did you learn about the actual process?

I mean, how does one go about donating their body when it sounds like it differs so much from state to state?

Yeah, it does and program to program.

So I'm in Maryland, which is why one of the reasons why I talked to Maryland, they also happen to be one of the oldest body donation programs in the nation.

They're governed by a state anatomy board, which essentially has a central application.

You fill it out, essentially expressing your intent.

And then if you are within state lines when you pass, they provide transportation to the university that will be using your body to teach students.

And so you sort of just have to do your research and find the program that sounds like it's going to match up to what your expectations are.

I mean, my father passed recently and his was really the first dead body I've seen with the exception of a field trip to a lab where medical students were dissecting bodies.

I'm curious, what about for you?

Has reporting this story and being in these spaces and around these bodies changed your own relationship or the way you think about death?

Death is something that I think about maybe more than most people.

Usually in my work, I encounter it through violence.

You know, my background is as a breaking news reporter.

I've covered more mass shootings than you can imagine.

When I wrote this piece, I wanted people to feel what I felt when I was at the forest.

I started to feel really calm there and really good about what I was seeing.

It's one of those things where I feel like for a lot of people, the experience of being in a place like this maybe surprises them that it's not morbid, that it's not out of a horror movie, that it's not scary.

I don't think that was the case for me. Those weren't the expectations I came in with.

And have you come closer to a decision on that?

Yeah, you know, I'm leaning towards one of the forest-like facilities, but it's a lot of paperwork.

Even in death, we can't escape the forms.

Abby, it's been an honor to talk to you. Thank you for taking time with us.

Oh, thank you for having me.

If you want to read Abby O'Hizer's full article for MIT Technology Review, we have a link to it in our show notes.

This episode was produced by Burley McCoy, edited by Gabriel Spitzer and fact-checked by Ubi Levine.

Our audio engineer was Natasha Branch.

Giselle Grayson is our senior supervising editor. Brendan Crump is our podcast coordinator.

I'm Aaron Scott. Thanks for listening to Shortwave from NPR. And Happy Halloween!